We believe chocolate always tastes sweeter when you know it’s from an ethical business – but how can you work this out?

For most of us, chocolate is a quick and easy snack that we can grab when we need to satisfy that cocoa craving. However, it’s easy to forget that chocolate didn’t start off its life wrapped in shiny packaging – instead, it was cultivated on cocoa plantations.

Unfortunately, as there are so many different stages to making chocolate, some chocolate businesses cut corners in order to pump out chocolate quickly and cheaply. We look at what it means to be an ethical business to help you work out what constitutes ethical chocolate.

What is an ethical business?

Unfortunately, this explanation can be interpreted in various different ways depending on the individual morals of the person leading the business – what is “fair” to them? What do they see as “wrong?”. Although there is no legislation forcing a company to be ethical, many companies are employing ethical practices as a way to set themselves apart from the crowd.

More and more people are now beginning to appreciate the importance of an ethical business, and it seems that this is particularly important to the younger generations; a Bentley University Study revealed that 86% of millennials list ethics as one of their top requirements when considering working for a company.

Whilst employees clearly see ethics as an important ranking factor for a business, what about the consumers? Again, it seems that the younger generation is the driving force behind the need for a company to show that they’re an ethical business, with more than six in 10 younger consumers stating that they consider a company’s ethical values and authenticity prior to purchasing their products or relying on their services.

What are ethical business practices?

Whilst a business might say that they’re ethical, don’t just take their word for it. An ethical business is only as ethical as their actions – we’ve broken down different practices a business should carry out for it to be deemed ethical to stress the importance of business ethics.

Whilst this might be obvious, an ethical business shouldn’t engage in dodgy financial practices, such as bribery or fraud. This applies to the employees as much as the business – if an employee is behaving in an unethical way which manipulates customers or shareholders out of money, this reflects on the business.

To avoid these ethical issues in business, the company should set out clear and strict zero-tolerance policies, with a clear disciplinary structure in place to take action.

Although there are laws in place to prevent the exploitation of an employee in the UK – such as not paying them the minimum wage or forcing them to work in hazardous conditions – some companies have found loopholes around this.

The fashion industry is notorious for using overseas workers to make their garments: as the supply chain is so complicated, most can wash themselves of responsibility, claiming that these poorly paid workers are not their employees. However, the Environmental Audit Committee has recently revealed that many brands are moving their production from developing countries back to the UK.

This isn’t necessarily a positive – in a 2018 investigation, the Financial Times uncovered that garment workers in Leicester were being paid as low as £3 or £4 an hour in unsafe working conditions.

As these ethical issues in business are often covered up, it is much harder for the consumer to take action and boycott the company. What’s more, the businesses will often face little retaliation from their employees: the Trades Union Congress has argued that many workers aren’t aware of their rights and don’t have union representation.

This may not be completely necessary for businesses, but nowadays most are expected to make some donation or contribution to a charity, with big brands typically donating more than smaller SMEs. Not only are large businesses expected to donate to different charities all year round, but most also donate additional funds to charities when there are large disasters: this year Tesco pledged to donate a £30 million package to support local communities tackling the burden of coronavirus.

Although the business won’t get any monetary gain from this, the more charitable the business is, the more favourable the public will look upon them: a report from Mintel revealed that 73% of Americans consider a company’s charitable giving before making a purchase.

Having a diverse workforce which treats all employees equally and fairly is a must for ethical businesses. Large businesses are also expected to set up schemes to encourage people from any background, ethnicity and gender to work for them.

For example, the engineering sector is made up of only 12% women, but businesses have been closely working with organisations such as the Women’s Engineering Society to set up schemes in an attempt to foster a more diverse workforce.

As the public becomes more environmentally conscious, consumers expect businesses to become more eco-friendly. Some companies might do this by using renewable energy to power their offices, or others might commit themselves to zero-waste schemes. Although there is still much to be done, many companies are starting to adopt green policies to show that they are a sustainable and ethical business.

At Hotel Chocolat, we’ve committed ourselves to a Planet Pledge: by 2021, 100% of our packaging will be compostable, reusable or recyclable. On top of this, we’ve also switched to renewable energy sources and dramatically reduced our food waste. However, we haven’t just stopped there – we strive to make sure we conduct our business in an ethical and fair way. To find out how we ensure we’re an ethical business, click here.

What is ethical chocolate?

Eating ethical chocolate isn’t as straightforward as it seems. Some businesses might try to claim that they’re ethical as they pursue some ethical practices, despite falling short of others. The best way to ensure that the chocolate you’re eating has been responsibly sourced from an ethical businesses is to do some research of your own. We’ve broken down a few different categories to look out for when looking for the most ethical chocolate.

How and where the chocolate is grown can indicate whether or not your chocolate comes from an ethical business. One of the easiest ways to spot unethical chocolate is by reading the ingredients on the back – if it contains palm oil, then you probably want to avoid this bar.

This is because farming palm oil has led to mass deforestation and the destruction of some of the most biodiverse areas in the world, such as Papua New Guinea. Endangered species such as the Orangutan, the pygmy elephant and Sumatran rhino have already seen a significant portion of their habitats destroyed, threatening the survival of their species.

On top of this, the deforestation caused by palm oil can dramatically affect the climate – for the worse. The removal of forests releases carbon dioxide into the atmosphere, meaning more greenhouse gases are trapped, accelerating the rate of global warming. The cutting down of trees also means that there are less around to absorb carbon dioxide in the atmosphere. If you want to find out more about why trees are crucial in combating climate change, we’ve put together a guide on why you should get involved in tree planting.

Don’t worry – we’re not saying that only healthy, low sugar chocolate can be considered as ethical chocolate. However, chocolate which is farmed using potentially dangerous pesticides should be avoided at all costs.

The EU has banned the pesticide lindane from agricultural use, as it has been reported to be a hormone disrupter linked to health issues such as breast cancer. Nevertheless, it is still being used in some cocoa plantations, putting the workers on the farm at risk.

Some chocolate companies clear themselves from any responsibility by asserting that, since they don’t buy cocoa directly from growers, they have no way of knowing whether their chocolate has been sprayed with this pesticide. The best way to ensure you’re purchasing ethical chocolate is to buy from businesses which source their cocoa beans directly from the farmers.

Because we buy from our farmers, we know our cocoa beans have been harvested in a safe and ethical environment. We even have our own cocoa plantation in St Lucia, where we directly grow some of our cocoa beans, meaning we have all the necessary knowledge to produce a quality bar of chocolate, from the roots to the wrapper.

Unfortunately, we simply cannot grow cocoa beans in the UK – our wet and cold climate just isn’t right for the humble seed. Whilst this means chocolatiers in the UK have to import cocoa from overseas, there are ways to do this sustainably so that you can enjoy a greener, more ethical chocolate bar.

Some businesses may also opt to transport their cocoa in the greenest way possible. At Hotel Chocolat, we’ve chosen to use sea freight transportation, which has the lowest carbon footprint. We also keep the carbon footprint of our cafés as low as possible by sourcing everything we need via our central distribution centre, meaning our cafés only need one delivery from us, rather than lots of different ones from multiple suppliers.

We’ve already looked at why palm oil chocolate should be avoided if you want to eat ethical chocolate. However, those who are serious about the ethical side of cocoa should consider incorporating a bit of dark chocolate into their cocoa diet. Whilst this doesn’t mean that you can only ever eat a bar of dark, munching on a little dairy-free chocolate every now and then ensures your chocolate eating habits remain ethical.

This is because vegan chocolate doesn’t contain any cow’s milk. In 2018, researchers at the University of Oxford found the production required for a glass of dairy milk leads to nearly three times more greenhouse gases being produced compared to any plant-based milk. As dairy milk needs cattle for it to be made, this means it consumes nine times more land than any other milk alternatives – not only is land needed for the livestock to live on, but it’s also needed to grow crops to feed the animals, leading to mass deforestation.

If you want to eat ethical chocolate, but don’t enjoy the deep, bitter notes of a dark, then don’t worry – our Nutmilk range contains all of the creamy, mellow tastes of a milk chocolate, without any of the guilt. We use hazelnuts to achieve a smooth and light finish – hazelnut milk is seen as one of the more environmentally friendly options out of plant-based milk choices. One of the reasons for this is that hazelnuts can be grown in moist climates, such as the Pacific north-west, meaning they need less water to grow.

Finding ethical chocolate might not be as easy as reaching for the cheapest bar of chocolate you see in the store, but we think chocolate which is bought from an ethical business tastes all the sweeter. Don’t believe us? Buy a bar or two from our stores to sample the difference. 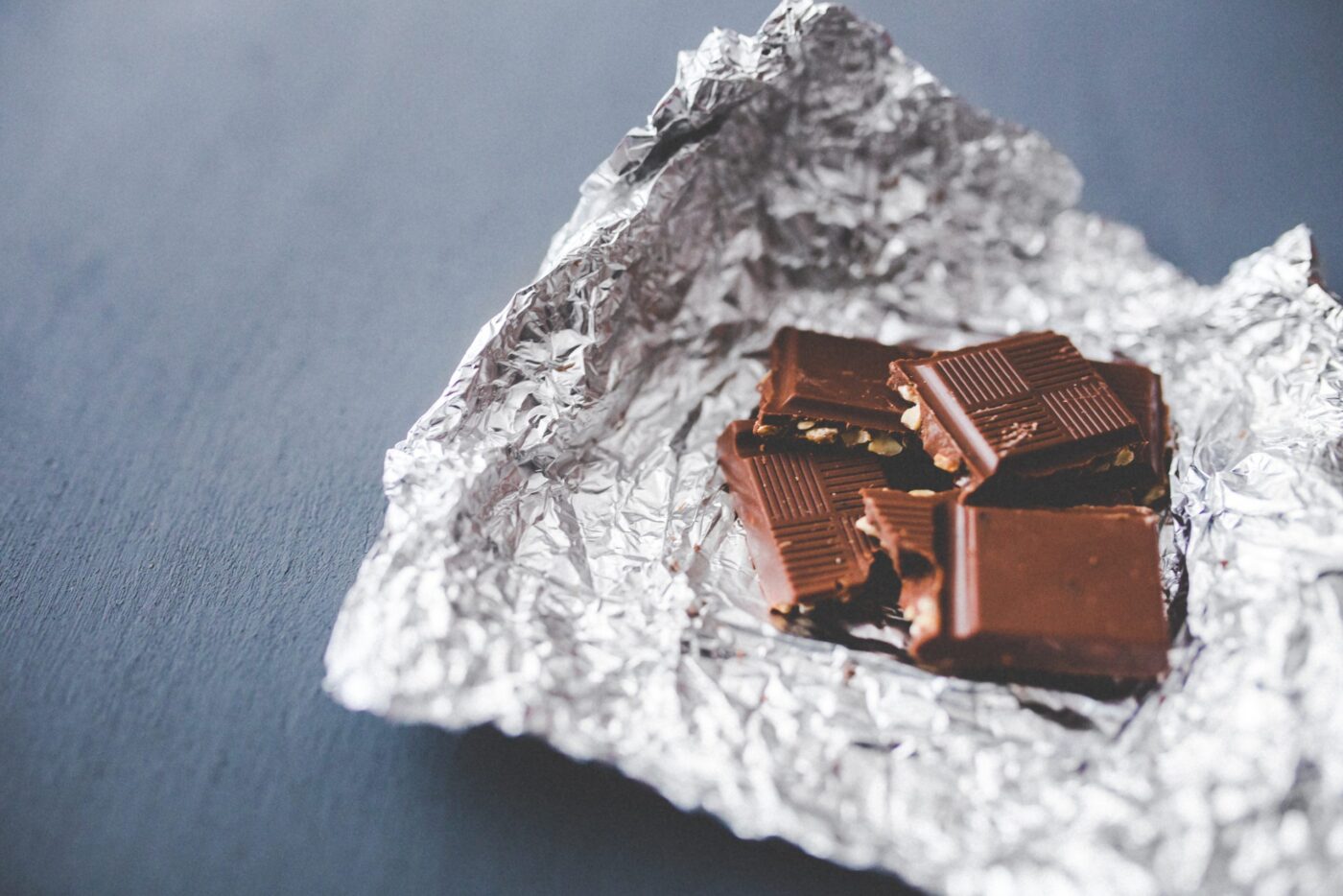 Chocolate culture around the world